I need to get into doing more homework. So here is my latest thing I started work on.

A Lazer beam for Necrons. A robot termination style race from Warhammer 40k 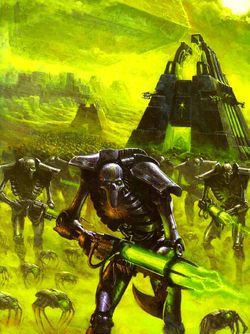 Keep in mind this is currently just the looping core of the beam. I will add a muzzle flash and end to the beam in coming updates.

All feedback or ideas extremely welcome

If anyone knows how to fix the pixel looking lightning issue I have here in Unreal. Let me know! Its currently a lightning texture with a popping scroll with a normal panner added on top. I can post an image of the material if need be.

Looking good so far, but I think it needs a more “solid” core. I’d recommend a thin solid core, and then layer more lightning with higher intensities and more white values to help break it up. You could switch your texture from whatever it is now to greyscale in the compression settings. It will make the memory the texture uses go way up, but for a demo to show off I wouldn’t worry about that.

You make a fair point! I added a bit more core to the beam. I didnt want to add thick a bar as I want to keep its sharp and unstable nature. I cleaned up the bloom on a bunch of the effect. Overall it was far to glowy. Im not a bit fan of mushy bloomy effects myself.

The lightning seems to have fixed itself. Though I have a feeling its because I closed and reopened unreal.

Thanks for the feedback btw dude!

It looks less choppy when animating at 60 fps btw haha. The lightning just looks like its scrolling in that gif

EDIT Quick update. I think I got a little to keen on the particles

I think you could push this way further, make it over the top. It’s Warhammer 40k!

As a starting point, I prefer to make these sort of effects burn your retina. It’s a frickin’ laser beam and laser beams should hurt your eyes.
http://imgur.com/a/POh3F

When you are making something based on an existing IP, it’s always good to do a search on the interwebz:
http://warhammer40k.wikia.com/wiki/Gauss_Flayer

It appears that the unknown energy field generated by the weaponry is
capable of breaking the bonds of the target material at a sub-atomic
level and energising them with an opposing magnetic charge to that
generated by the weapon itself. This accounts for the “flaying” effect
noted in many after-action reports from Imperial commanders in the
field. As each layer of skin or muscle is exposed, it is broken down by
the weapon’s beam and carried towards the gun. This obviously results in
catastrophic failure of the biological components involved and their
dissipation into vaporous form.

So, if you wanted to make this extra cool for fans of Warhammer 40k, you would have bits of stuff coming from the target back to the gun.

Alright, iv pumped up the strengh of the core beam and blown it out a little. Though I think it feels a bit thick and boring now.

I red that discription of the effect before I started by the way. Im trying to give it a real unstable power look. I feel now it looks a little too stable. Ill post more in a bit.

Nice looking cool man! I like the amount of variation within the beam you already have going on. Can’t wait to see this in motion

Much better, feels like it has some energy. Adding some wobble is usually a good thing for beam effects. Some Kirby dots swirling around the edges is another way to add some chaos.

Here it is animated. Gif compression always makes these things look a little shoddy.Though I think it has a little bit too much going on now haha. Im interested to hear what “kirby dots” are.

Now I need to animate the beam firing.