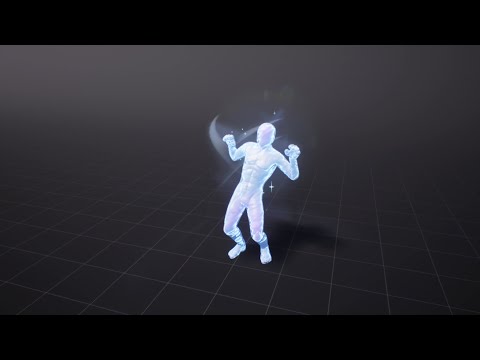 I wanted to get a little more familiar with the Sequencer, Niagara and the UE5 overall. I did some technical tests yesterday and it seems to be successful (?)

-Vfx Spell Cast
-Freezing of the character
-Vfx of a spike (or hammer?) hitting the frozen character
-Splitting into pieces of ice

This is a mix of:

Here is a better view of the Ice Shader (wip)
Mostly done with:

This is awesome! Great result so far

Really nice. Did you get the look of the legs being offset from the edge with vertex offset or was it done with fresnel?

wow, looks super nice. i love how it really looks like a thick layer of ice around the actual geo. very nice shader!

Absolutely love this, would love material breakdown if possible!

I added a shine effect in the ice shader that I can control in the sequencer using a Material Parameter Collection (it’s super fun to play with).
I’m using it when the Freeze is complete but also when the character is destroyed.

I also got the main intentions of my particle systems.
I’m now working on those particle systems, texture, materials, etc I think most of the animation and sequencer stuff is done.

I’m creating an icy wind spell to enhance the freezing effect.
I feel like I’ve managed to stay in line with my blockout and I’m quite happy with the result.

I was able to finalize the effect and finish everything I wanted in time.
The cold winds were a great challenge to overcome!
I have indeed gotten more familiar with the sequencer, Niagara and UE5, so I am very satisfied with this experience.

Additional bonus, I quickly reused the effects to make them work on a first person character

Final result is at the top of this post, if you have any question or feedbacks I’d love to hear them!

I think it is my fav effect for this sketch series

so polished and cool idea!

Your effect looks really good, the shader + the meshes and particles look on point

I wonder when you say Sequencer you mean “Level Sequencer”
I did VFX in Unity before and I have a hard time adapting to Unreal way of thinking, especially when animating meshes and timing everything together

The effect is really awesome, would love to see a material breakdown, looks interesting

I suppose that Sequencer is like Timeline in Unity

Yes I’m aware of that, but sequencer can’t be used inside of a blueprint.
I mainly use my VFX for games and need to have like in Unity prefabs.

Can’t seem to have the same control in Unreal

I liked the expression that frozen and then shattered by icicles. very well done!