I’m currently working on an FX which needs to look something like this.
Sketch of fx

So there’s a trail that pops out behind a car, some blocky textures in the trail that dissolve near the end.

Now I’m stuck writing a shader in unity to get the FX that I want. I’m used to unreal and I can make materials / shaders without too much trouble (at least the basics) and I made the shader in unreal aswell to make the conversion to unity a bit easier.

But now my bigges problem is the looks. The unity build looks flat and has no emissive pop what so ever plus the small light dots that appear in unreal are renderd black in unity. Does anyone have a solution on how to possibly fix this?

Below you can see where i’m currently at. Thanks! 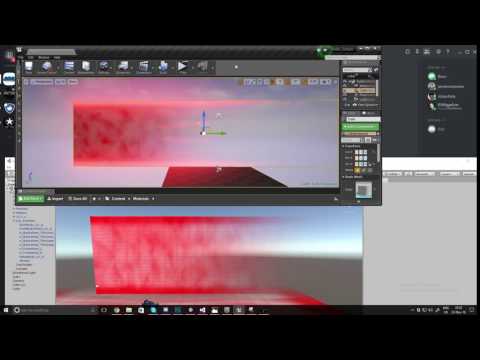 You can also use a plugin for it. There’s plenty of them on the asset store, and I’m sure a few are free. I personally used this one (not free) at my last workplace, and I really liked it: Unity Asset Store - The Best Assets for Game Making

As for the black dots, maybe it might come from your shader? Without more indication, it would be difficult to help further on that matter.

I’ve dabbled with the bloom, but the annoying part is that in our game enviorment other light parts start having this unwanted bloom effect. So sadly this is not an option.

I’ve made this with 2 packed textures and one large texture to combat the stretching form the trail renderer.
(the clouds)

Thanks alot for you reply though.

I’ve tested it in our current level and tweaked with the bloom settings some more, and it does work. I was a dummy for not looking at the threshold setting of the script or at least interpreting it wrong!

Hehe, no problem at all, and hear to see it’s working.

Regarding the bloom issue you’re having (with unwanted bloom on your other objects), have you considered a setup with multiple cameras? You could apply the post effect on one camera set to only render a specific tag/layer (i.e. your trail renderer). I’ve used this approach for GUI layers, etc. Link

I did a bit of digging into some alternatives and you may look into how Unity creates the bloom effect. If it’s referencing alpha values to create the bloom (like Unity 4.x glow effects), you could create an alpha override shader which effectively masks out the objects you don’t want to apply bloom to.

Yeah I need to delve into the shader stuff more. Now it’s fixed with the treshhold though but I’ll take this information and share it with my colleagues and see if this is will be helpfull in our project or not.

I appreciate the help!

No problem, glad to hear it’s fixed using the existing perameters! I’m sure that approach is cheaper than either I mentioned as I know creating a separate alpha override for the post effect will likely require another render pass, etc.