I’m going to start posting some of my VFX here! I won’t be posting too often since I spend a lot of time doing tool creation and procedural modelling, but when I do some VFX I’ll document them here.

This first effect is based on the old World of Warcraft ability called Remorseless Winter (I don’t know if it’s still in the game or not). 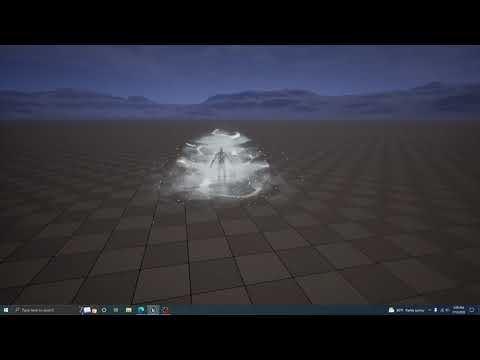 It looks really dense in there, that’s cool! I’m specially interested on how you made the dust coming outward and fading out, and the rotating smoke-like rotating in the center, almost on the character. This gave it a lot of “volume”

The dusty air that is fading out is actually quite simple. The material used is a tiled texture multiplied by a radial gradient to create something that looks like this (where it’s grey is actually transparent): 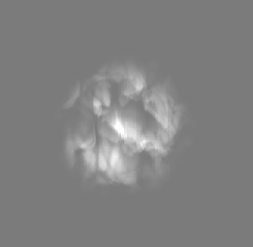 (This is also panning slowly for a little more movement)

Then, in the particle system (UE5 Niagara) I’m using a sphere location for the initial spawn with a size that will spawn them to cover most of the character. And then the main thing is I’m applying a vortex force that also has some origin pull and that pushes some of the dust outwards while keeping some on top of the character. To make it less distracting, the overall opacity is set to be very transparent and overtime the opacity fades in and out following this curve:

The other element that adds a lot to it is the ground swirl effect which is mainly driven by a material with dynamic parameters. It’s a little more complicated, but a tiling texture is panning in a radial direction over a ring shape that is created by two radial gradients subtracted by each other (creating a ring because one is smaller than the other). This is the material: 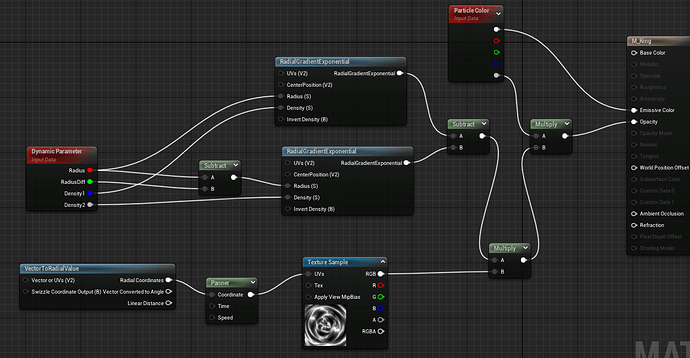 In the particle system, the ring shape fades (similar to the dust) but it also increases in size. A less noticeable aspect of it is that the ring shape also becomes thinner over time by increasing the radius of the inner radial gradient over time (making the ring hole bigger and therefore the overall ring skinnier).

Hope this all made sense