I think that the most valuable resource is sleep and physical activity, because they will dramatically boost your ability to focus and enjoy what you are doing.
I would definitely stick to what your mate said

Relax and enjoy the ride!

@SelicatoArt You are totally right, I’ve been feeling better since then.

RTVFX_EOD1024×60 3.51 KB
Today we had our weekly lecture with Jason Keyser and the assistant mentors and they showed us a lot of cool things that they are working on for future courses updates! They listened to all of our feedback and answered all of our questions. It’s really cool to know that every week my work is going to be revised by such talented and experienced artists.

RTVFX_Beat1024×60 4.08 KB
Today I started working on mesh based FX and this is what I ended up with. I still need to tweak some things, but overall it’s been a great experience and I learned a lot. Being able to stream my progress in the VFX Apprentice’s community Discord server helped me a lot because more experienced artists were there to solve my questions as they arised.

I’m still having troubles exporting my GIF with the real VFX speed, maybe I’ll just reinstall my GIF editor and stop meshing with the export settings.

Textures used made by the VFX Apprentice mentors. Ground tiles made by Kenney.

Thanks for your time

RTVFX_EOD1024×60 3.51 KB
Long story short, I was contacted to be hired as a technical artist in really cool projects so I’ve been working in both Unity and Unreal these days with no much free time left. I didn’t share anything because all the projects are NDA protected. I still want to be a VFX artist but I couldn’t say “no” to this wonderful offer.

I also officially enrolled in Rebelway’s stylized course. They granted me access to the first week of content even though the course starts the 5th of November (which is also my birthday yay) so I decided to follow along in order to have all the Substance Designer graphs done and also the UE5 project ready for later weeks’ projects. Now I’ll be able to only focus on the artistic things once I start the course, at least for the first week.

Tomorrow we have one of the live weekly workshops on VFX Apprentice and we’ll be working on a stylized muzzle effect. I can’t wait!

RTVFX_Beat1024×60 4.08 KB
I had spare time to follow last Rinban’s live workshop, sadly it isn’t available anymore. I’m still halfway through it, but here is the result:

We decided in the VFX Apprentice’s community to create this short follow-a-random-tutorial-in-one-day challenge and I ended up with this cool two-sided shader (amongst other things not worth sharing at the moment). This is the tutorial that I chose even though it’s in Russian and uses Unity. The author ended up creating a stylized Kamehameha, in case you are curious. I guess that I can stop using messes with inverted normals for my personal projects in Unreal now:

I wanted to know if I can apply my HLSL knowledge in Unity, so I went through the first three hours of Freya’s playlist of Shaders for Game Devs and experiment a little bit inside the engine with the things that she taught me (mostly with custom color gradients, vertex offsets and pattern creation by applying trigonometry to waves).

Oh, and yeah, that’s the Unreal mannequin in the Unity Engine because I missed him a lot.

This is my code for the last shader. Don’t expect a lot of optimization, it was just a fun experiment. 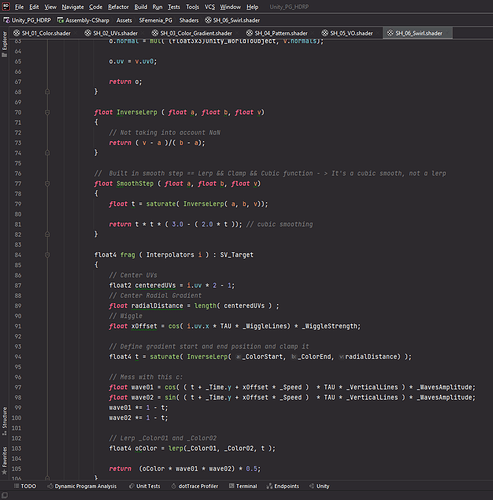 And finally I can show you what I currently have for my Rebelway’s first week project. I’m really excited about this because I can now only focus on getting the concept, the shapes, the colors, the beat and all the artistic things that I want to get better at. Meshes done in Houdidni, textures in Substance Designer and project in UE5. Really early stage, but worth sharing in order to see the improvement some weeks from now:

RTVFX_Reflexion1024×60 5.09 KB
Last week I had this conversation with a really good friend of mine and I ended up realising that I’ve been hiding behind the technical part of the job because it’s my comfort zone and I know how to get things done. Tomorrow I’ll get my copy of the book “Elemental Magic, Volume I: The Art of Special Effects Animation” by Joseph Gilland, which seems to be the go-to reference book for all stylized VFX beginner. My plan is to study the illustrations of the book by traditionally recreating them. I’ll scan my sketches so I can share them here too if my cat doesn’t try to hunt my scanner.

I’ll also try to only make technical things at my work and only focus on the artistic part of VFX outside of it. What’s the point of making a really cool Uber shader if then I make spiky shapes on a red heal buff?

I’m so hyped to start this new path. Time to create cool concepts and a ton of shape sketches!

Thanks for your time