Hi all! This is my first WIP post (and probably the first post at all) on this community, i’ll post my work in progress of a nature healing AoE effect, while i try to assimilate every tip you will send to me!

In Photoshop you can use Polar Coordinates,
it takes something like this: 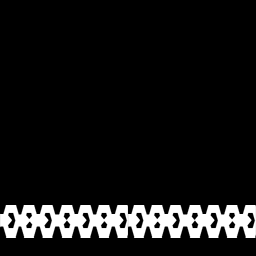 And turns it to this: 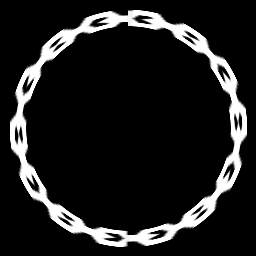 It is under Filter–>Distortion–>Polar Coordinates

If you still want to use a straight texture, you can make a 3d circle mesh and apply your texture.
Hope it helps.

That’s great! thank you very much 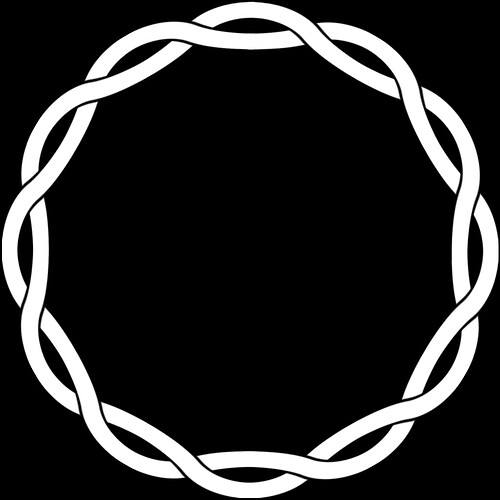 Hi there! Quick recap.
The next thing i wanna do is to make this circle slowly appear.
As suggested by Spyro, i tried investigating with the radial shaders modifier and linked.
Now the circle appears and disappear cycling, but i can’t figure how to make it only appear. Here’s the result (i don’t know how to record, crop and import gifs, i’m new here) and my graph (i am still noob at this).
Also obviously, the shader countinues rotating and it is not aligned with the “start-stop” of the particles, making the effect de-synchronized with other particles.

Ty to all of you 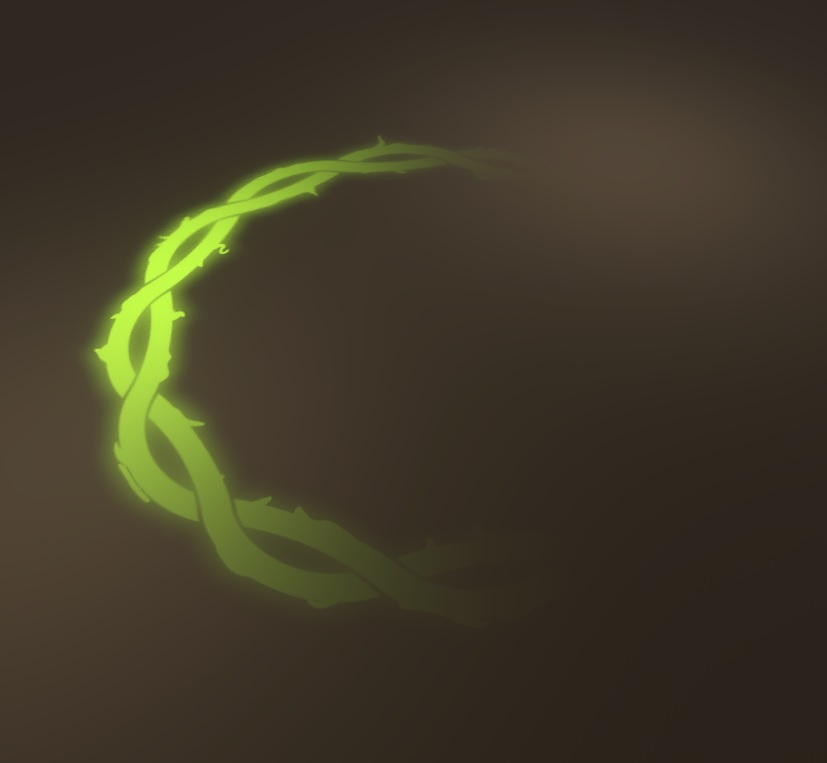 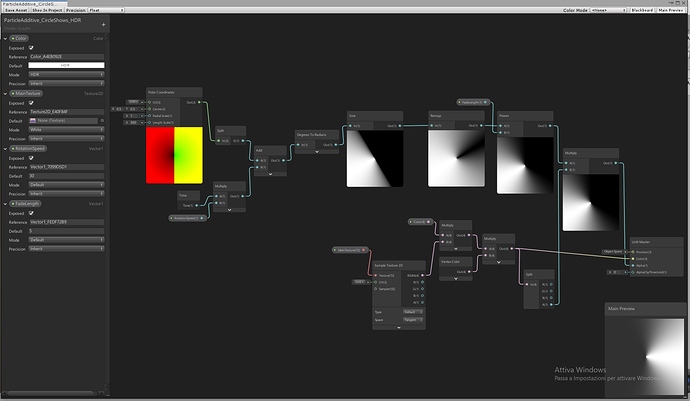 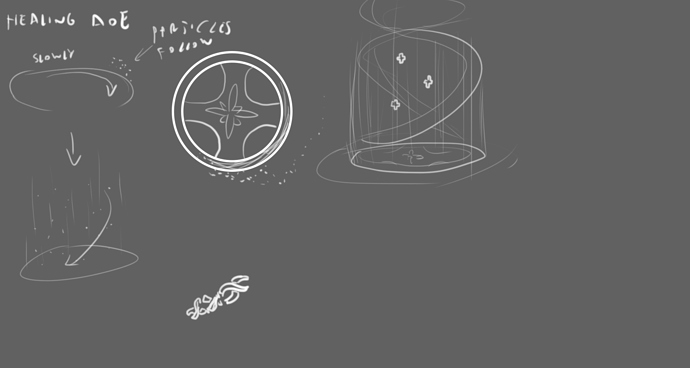 Hey everyone ! Since few weeks, I saw many questions about ’ Custom Vertex Stream ’ (called CVS here) on Shuriken with Shadergraph/Amplify Shader First, here a really good post about CVS by Mirza Beig where a lot of things are explains : http://www.mirzabeig.com/tutorials/intro-to-custom-particle-vertex-streams/ I will only tacle how to link CVS and Shadergraph/Amplify Shader! Here the shader we will use for Shadergraph:[Base_Shader] And here the shader we will use for Amplify Shader:[Base_…

If you want more control than polar coordinates just make a mesh in your 3D package that is a disc shape but has the uvs laid out straight - then it’s super easy to change the tiling or width of the texture too. Then just render a screenshot with a black background and you have your texture. You can also use all the 3D packages tools then, like adding noise etc.

Thanks for all the answers, but i’m missing something. A lot of the shader graph is total dark for me, so i don’t even know where to put the hands on

This is what i did for now, pretty basic and really far from the result i am searching for 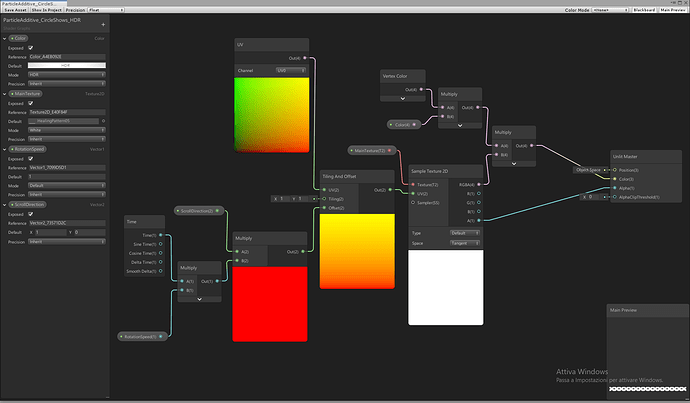 Update: now i can control the opacity of the shader, but only with a slider, i can’t find how to make the effect start with the particles instead of continously spinning with the Time node 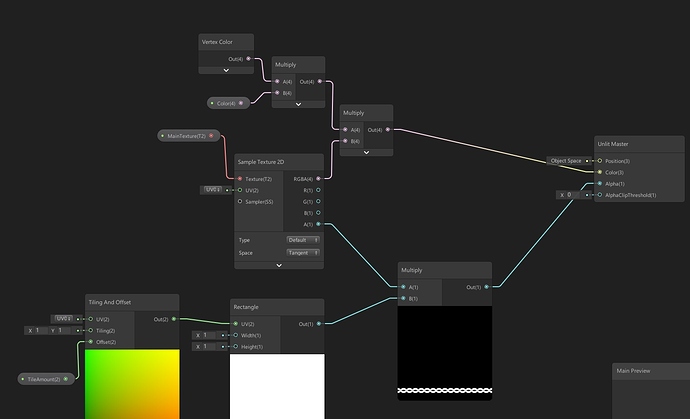 Here’s how you can use the Custom Vertex Streams of the particle system to control the properties of you shader: https://youtu.be/9Nv28O2OIoQ?t=495

Thanks all for the tips, but i still can’t get it, so i paused the effect for now. Here’s the progress on the other side!

It looks amazing so far!

Update!
As i am still locked behind the “circle creating” shader, i made some improvements with the other effects.

For the mysterious shader, here’s what i came out now:
I can control the dissolve by using a slide that goes from -3.2 to 3.2, the next part will be making the dissolution smoother, and with custom vertex stream (i think?) making it animate by himself on particle play press.
Over these days i’ve experimented some weird things to make this circle happen, and i discovered a lot of useful things in shadergraph!

PS: I tried with a straight line and UVs, but the result was a messed up circle, pixelated and stretched, so i moved in this direction. 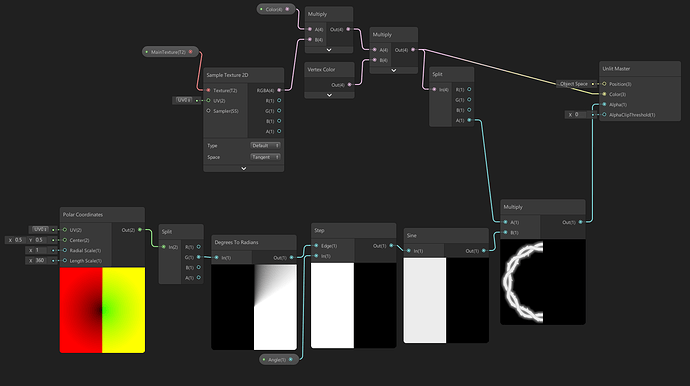 I want to do 3 version of similar effects ( in this case, AoE spells with a long buildup)

For now, the nature one:

And the Void one to be done, with a camera scrolling galaxy shader.

For the nature one i only have to figure how to smooth the fade as i said in the reply before this, but i paused it in favor of the hellish.

For that one, i explored how custom vertex stream works, and it’s really incredible how many doors it opens once you got how it works. It still needs something, like particles and rocks meshes, but overall it’s working well. But i feel something wrong in the transition between anticipation and climax, it seems to be way too fast and we can’t notice well the flashes before. i would appreciate criticism over this (and the other one of course), thanks !

How did you go about the earth breaking up when the feather lands?

Those are some serious improvements my man! I hope to be able to make stuff like this soon

Hey! The ground crack it’s just an alpha texture “crack shaped”, with another crack texture above it with the same shape but a little cutted in some parts (i just used the erase tool on photoshop to cut some areas) and high hdr intensity.

I guess i can consider these as a final version, i don’t want to improve them more, but move on other effects, only to came back to AoE and make them better from scratch!

Also in this week i worked with my team for the community game jam! I made all the vfx, check it out if you want!