Anyone know how to set up a parameter for scroll speed U and V in Shader Forge?

Im mucking around in unity with Shader Forge at the moment. Im trying to set up a parameter so I can change the U and V scroll speeds independently outside of shader forge. However, I cant seem to figure it out. I tried appending two time nodes with a multiply together, followed by plugging the output of the append into the Dst on my panner. That does not seem to work though.

Anyone have any ideas? Any help will be greatly appreciated!

Heya - I think I have a setup that could help with that.

The top group is for manual UV panning that can be keyed in animation and the bottom is for auto UV panning. The switch is there to control which is being used.

Using the sliders or a value node exposes the use of it in she shader itself in Unity which makes editing on the fly easy.

Let me know if there are any issues, I’m sure there are better ways to do this but for my needs it works. 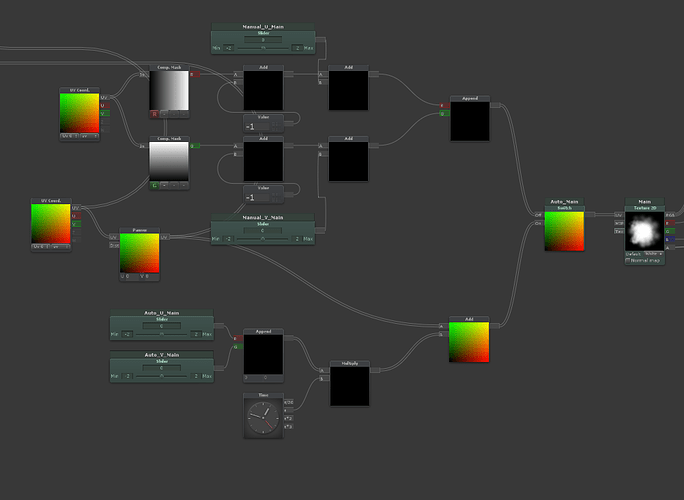 OOOO! Ill give this a go tonight! I was thinking of going down the build your own panner route. So rather than affecting the panner from behind, you did it after. Is there any need for the panner though at that point? Cant beleive I didnt think of trying this! Thanks heaps dude. Ill get back to you and let you know how it went!

EDIT Wait, you are using the panner for somthing else behind I cannot see. Derp

Oh yeah, I should’ve disconnected those before the screenshot, it’s bringing in UV distortion that I wanted to be able to scroll as well - my bad, sorry about the confusion.

om behind, you did it after. Is there any need for the panner though at that point? Cant beleive I didnt think of trying this! Thanks heaps dude. Ill get back to you and let you know how it went!

His documentation has a some cool stuff to look at that he’s made samples for. The custom panner is the one I think you are lookoing for.