Plan is to make a hologram of our solar system (Pluto excluded, R.I.P Pluto).

I’m not going to use the real world parameters for scale, distance, rotational speed and so forth since you wouldn’t be able to see most of the planets at all then. I do however want to base the relative values in reality and modify them so they look ok.

I started blocking out the planetary bodies today and giving them some semi realistic values.

I grouped the 4 inner planets and the 4 outer planets together and calculated relative values based on that to get a more consistent look. I also think I’m going to differentiate between the inner and outer planets later somehow to emphasize this.

All the planets are separate meshes stacked on top of each other. Their rotation about the sun is a rotated vector over time that pushes the planets out their respective distance from the sun.

I added some new elements to the hologram.

These are the curves I’m currently using to drive the raising and expanding of everything. I’ve abstracted it out to a material function so I can use the same curves for all shaders that need to access them while just updating it in one place. Later I might break it up in two separate functions to avoid doing double calculations in the shaders that only need one of them but for now this is faster to work with. 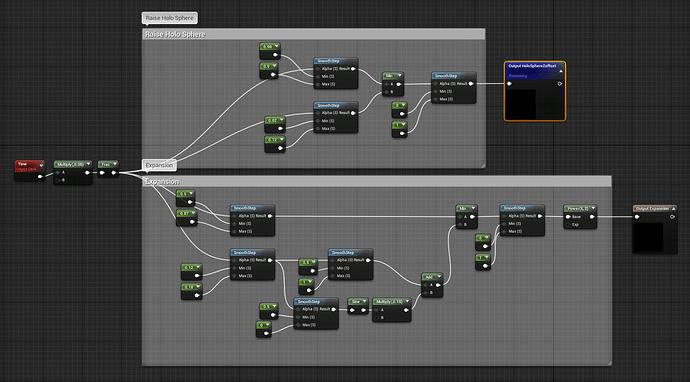 Feedback is much appreciated

I iterated on my hologram. Most notable differences are that I removed the fresnel on the bubble since I didn’t think it looked much like a projection with that. I also added a plane with some rings, marking out the planets orbits.

Also ever since I saw Living Particles I wanted to try making something like that, so given this particular challenge I took the opportunity to play around with that when creating the floor.

I’m using a spheremask around the hologram and around the player in order to keep the floor leveled beneth those points. The floor is just one big mesh and in order to displace every hexagon in unison rather than per vertex I painted out pivot points per hexagon in Houdini and use that in my mask.

Incidentally I’ve been meaning to do something with custom painted pivot points for some time now so that was also a reason for doing this!

Below is a representation of the vertex colored pivot points.

I really like your work!!
It looks really good and the movements your achived are amazingly well crafted.
Great job!!

One thing you can do is using the distance of the center of the sphere to ¨light¨ the groound or the black components, as if the holograme is emitting light.

I placed it in the same position as the sun and adjust it’s intensity with a timeline. I figured that would be fine in this case since it’s not affecting the movement of anything.

I also did some general tweaking of things.

Unfortunately too much is happening so I’m having a hard time making a gif below the 4 mb limit that covers the whole effect so I’ll add a YT clip instead.

Also a neat little trick is that when the hologram is deactivated I just collapse the planets, sun and orbits in to their respective pivot points to avoid them being rendered. 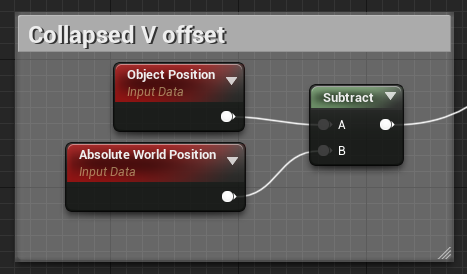