Another beamlike explosion. Want to learn more about dissolving meshes!

Hey guys! I’m working on a new effect and I got it feeling quite nice! But I’m not done with it and I’d love to hear what you guys have to say.

Also I want to add dissolving meshes as smoke instead of the black smoke that’s present now to see how that works. Got any tips or ideas then I’m all ears!

So this is a GIF of the final effect: 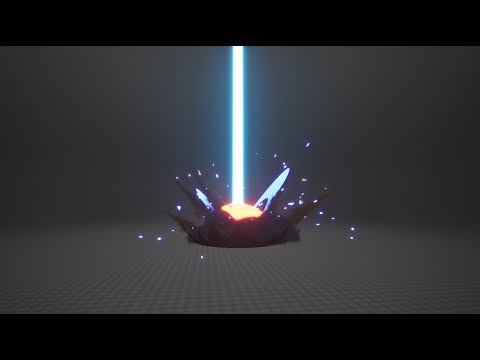 Who said you can’t use a terrain generation tool to make smoke? It’s just spaghetti like the rest!

Here’s a first draft on the right path, I think, in making some mesh smoke with a texture generated from World Machine

I like how the glow feels internal and that there’s not too much noise in the color. But it still needs a lot more work!

I’m actually having a blast with World Machine at the moment! It’s super fast to iterate with and it automatically outputs the texture right back to Unreal, ready to be reloaded. Whatever changes I was thinking of doing in Photoshop, I’m trying to find a solution to inside WM to keep the iteration speed up!

Been experimenting with different shapes and how to deal with the sphere being a typical sphere with it’s pinch-points… Right now, both pinch points are getting higher values when it comes to the vertices being pushed so it looks a bit funky. I’m gonna see if I can even that out tomorrow since it’s all coming from the texture.

It is nice though to keep pushing those vertices even further when the smoke is disolving.

This is what it looks like in the effect:

Going to make the glowy 2D sphere 3D with its own disolve tomorrow as well. Will be interesting now that I have a little bit of a workflow for it!

I really need to fix my math for tiling the texture inside of World Machine. Other than that! I think this could work out real nice.

Same texture, I just picked different texture channels for what was supposed to be glow and what to be smoke. Glow color is controlled from the material instance atm. … Might want to switch that around…

Alright, so this will have to be enough of testing on this effect. Need to move on to new stuff!

Lets break this down a bit:

My test included a normal sphere, not an ico sphere or football, which resulted in the oh so funny pinchpoints. It’s still visible when the sphere’s are facing you but the texture work can fix most of that, unless you’re panning the texture. 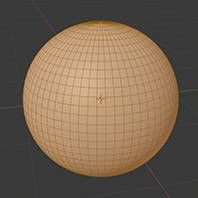 This one is too tesselated! But that’s the one I used. For science.

Next up there was the problem of needing a texture. And I didn’t feel like I would be able to draw the kind of effect as well as generate it somehow… I could have used Substance Designer, most likely, but I didn’t have a licence and I know World Machine handles a lot of noise generators to make terrain so I had a look in there! And this is the texture World Machine gave me:

I used their Voronoi noise generator and inverted the results to get the cloudy feeling texture and then I used a function called “Height select” which allows me to mask out part of the heightmap based on a range set in height. This gave me the glow between the puffs of smoke, adding to the illusion of thickness and interior heat of the smoke. I then combined it all through a “Channel Combiner” which in turn is connected to a “Bitmap Output” which saves my image file to my unreal textures folder! The iteration speed!

Back in Unreal I made the material so that I could pick which channel of the texture I wanted to do what with. So flipping the looks of the smoke into a fiery ball of heat wasn’t very hard. 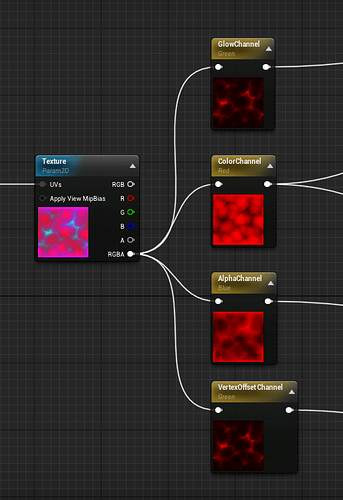 bild493×717 78 KB
Also, having a separate channel, and texture for the alpha was nice to make it all a bit less repetetive.

That’s it.
Let me know if you have any questions!

Cheers, so are you just scaling the mesh or doing some sort of distortion?

I’m scaling it up and offsetting the vertices. Thats probably whats making it look distorted. I’m trying to push the verts even further once the smoke has dissolved a little bit to make it look more like a bit of turbulence

Yeah it looks kinda cool, I thought it was WPO… can you twist it like curl noise?

I dont think my math is powerful enough

But one could add turbulent particles with ribbons that look like smoke curls!

I love me some ribbons

Hey buddy what’s up? I’ve been folowing your work for a good time with the objective of replicating a similar effect in Unity for studying purposes.
For now I did made through the blast part of the explosion and it is missing 2 things: Anticipation & the explosion’s after effects (falling particles, the flying debree “smoke-spikes” you made there surrounding in-between the smoke and the burst zone, the scorch on the ground, etc…). For both of those points I know how to make most of its components but what really is getting on my way is this thunder-like effect that emerges from the ground and I don’t want to end believing you did it in After Effects, and thus not being rendered on Unreal Engine hahaha
How did you ended up getting this beam-ish & thunder-like part of the effect? The other hypothesis I have on how to make this beam is just an animation rendered on a billboard plane, would you lend me a hand on recreating this beam?

The first part is swirly meshes going inwards and one rotating around the sphere that stretches upwards. After that is the beam.

The beam is divided into several emitters, actually. There’s 1 emitter creating the lightning that looks a bit like an arrow making a sense of upwards travel, then there’s another emitter with a gradient stretch out on a long particle, then there is another one creating a tiling lighning-thing and then is the final big, wide gradient that gets thinner over its lifetime.

Hope that makes some sense?

I am really thankful for your words Johan! I really appreciate it and also im hoping I could understand better this lightning spark effect that you achieved there on the beam: it is really what amazed and inspired me on the creation of my own explosion effect.

I might move on to the next challenge thought