Update (8/27/18) original post on rotational issue has been solved, and I’m updating my current progress here as opposed to creating a new post. The shader is based off of @Mederic post found here: Smoke Lighting and texture re-usability in Skull & Bones 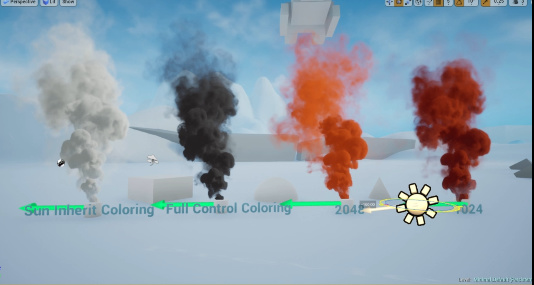 Hey guys, I wanted to share my progress thus far mimicking a fake lighting setup similar to @Mederic’s post on Skull & Bones. I’ve hit a bit of a wall where I don’t know how to get the shader to work with rotation values on a particle. If it rotates in the world, the lighting will stick to the texture coordinates. I imagine that if I could hook in the particle rotation into the shader I would be able to fix it with a subtract from the light vector or something, however I can’t find an input that works for that yet. Any ideas? 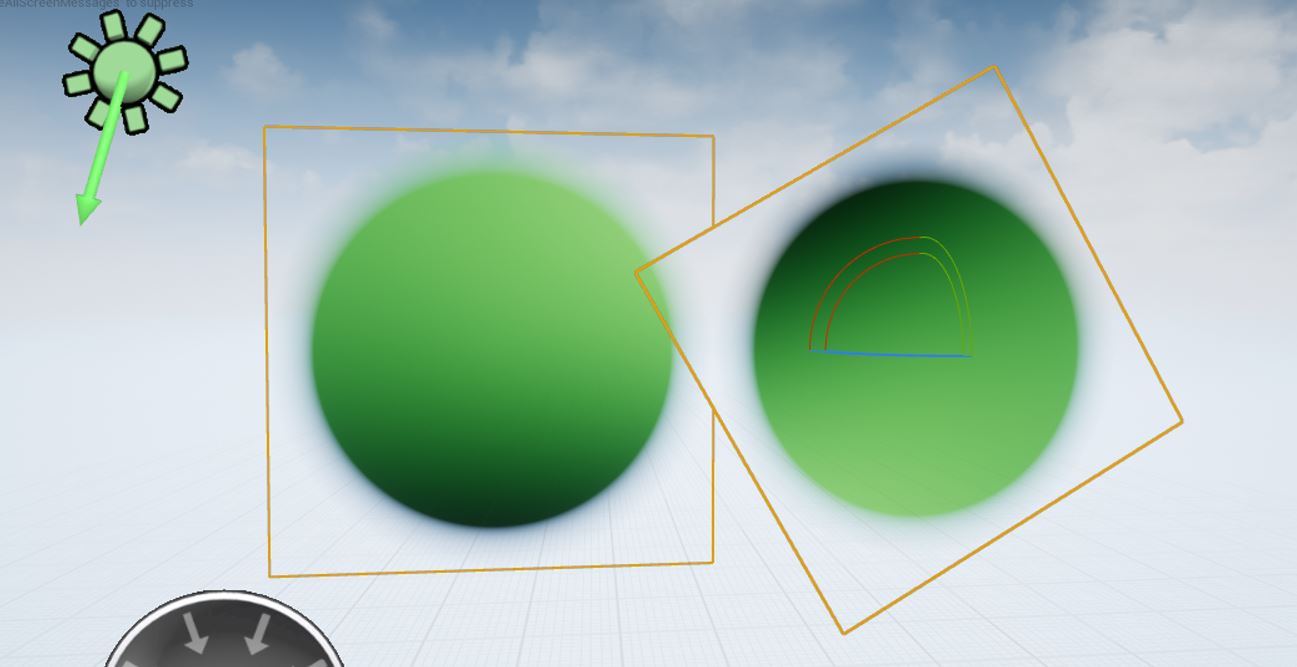 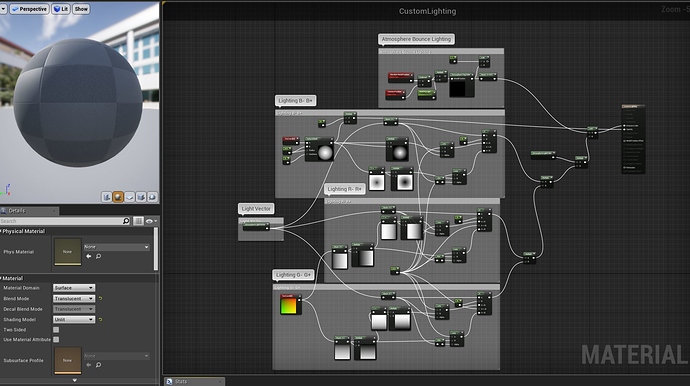 It looks like your lighting directions are all derived from tangent space?
If that’s the case then they’d need to get transformed to the same space as the light vector (World), or preferably see if you can transform the Light Vector to tangent and see how you fare with that (you’d probably be able to punt that to a vertex interpolator to keep down pixel cost.)

What alex said, basically if you are using the code in my post (or based on it), the Light Vector direction needs to be in Tangent space. From the looks of it, you’re getting it in world space, so you’d need to pass that Light Vector node through a “World to Tangent” transform node.

Ahh ok I think I get what I need to do. Ill give it a shot tomorrow and see where I land with it. Thanks for the help guys!

hey it worked like a charm! Awesome! I get a little bit of artifact with the blends but I think I just have one of my channels backwards or something. Definitely a lot closer to where I want to be though! 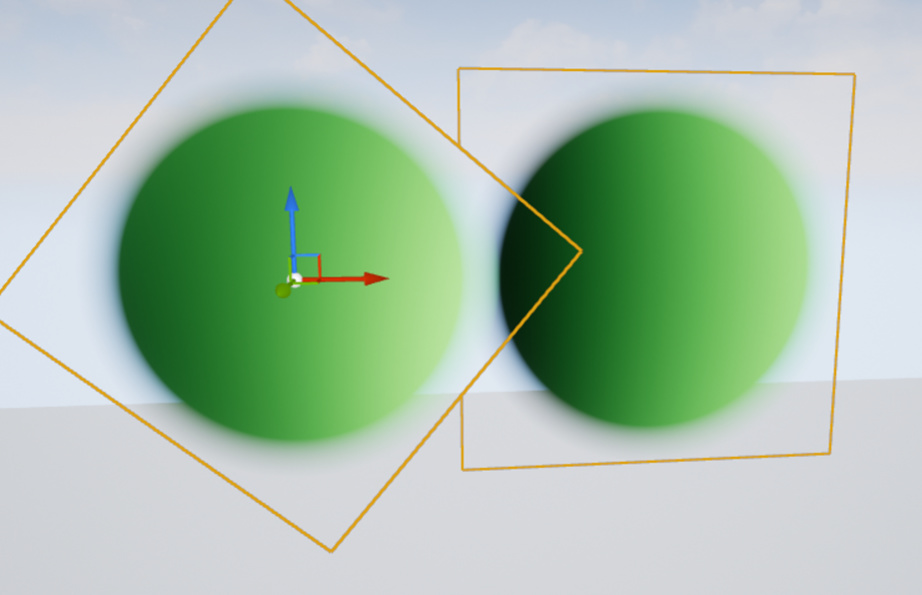 In the specific case you are displaying above, you are blending between 2 maps, (roughly half of Z+ and half of X+, i think?) . So it’ll never look exactly like pure X+. Once you have proper lightmaps (instead of sphere gradients), the details will hide most of that as it kinda blends in.

A bit more work into the shader. Using multiple resolutions. (Edit) Will proceed with the 1024 version which is using 2 1024’s, one alpha one not.

I also did a version of the approximation of the front and back derived from just left right up down that @Mederic does. Images of result below.

Still have yet to implement the ramps for color remapping. That’s next!

Here’s what the current labeled “2048” example in the video uses. The second one from left just takes my lightmap output at the end and I input 2 color parameters to completely control the coloring of the clouds which is also nice.

Thanks to @EStampes, seeing your graph helped me understand the math a bit better than my first take, allowing me to just ditch my lerps and multiply my lightmaps as @Mederic originally had.

I also gave the approximated front and back a go. The front looks pretty close to actual front with a bit more contrast. I feel I want to play with the back a bit more to make the edges and lighter thinner parts at the end of the sim pop out a bit more from the solid darker center. For anyone curious here is the math in nodes attempting to duplicate what Mederic layed out (also, let me know if that math looks wrong): 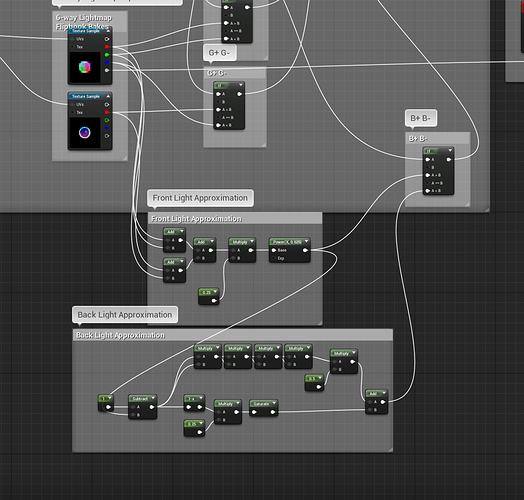 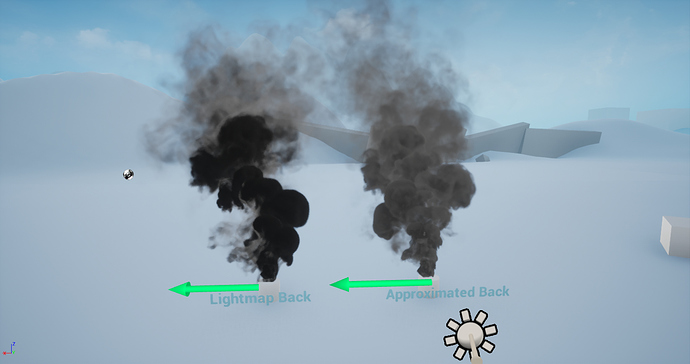 Also pretty happy with how the sim turned out in Houdini, upper half of comp from texture 1:

Feedback on how to optimize/improve super welcome. Thanks guys, and thanks again @Mederic!

Have you tried downscaling your animated lightmap texture to 1k? It holds up pretty well as well as being a huge memory saver.

Yeah good point. The version on the far right is using 1024’s which still holds up, I’ll move forward with making those ones work. Also, makes me wonder if there’s some post process I could use to hide pixelation and sell motion blur

Motion vectors? Will post a link when I find one remember a tutorial/write up a while back for them - Also great work man been useful for me to learn from so thanks for the updates and write ups

My only question is in your node graph above whats in the second texture?

My only question is in your node graph above whats in the second texture?

Hey Nate, in your material setup in the 6-way Lightmap group, what’s the second/bottom texture sample? Is that just the same flipbook rendered from the “back” of your sim?

Hey Nate, in your material setup in the 6-way Lightmap group, what’s the second/bottom texture sample? Is that just the same flipbook rendered from the “back” of your sim?

I guess you could refer to this

Dang, thanks. Dunno how I glossed over that the first time

I am very interested in this discussion and am trying to recreate what you posted, but I have to ask a sily question, what is your material’s shading model, ie lit directional or what? as I am getting no effect from my actual lights, or do you have to feed in the light direction vector using a blueprint?

If I remember correctly the shading model is unlit. The vector for the light is fed in using AtmosphericLightVector which is the default sun/sky sun direction. I never got beyond using just that so if you wanted to use your own lights and (feed them into the shader) maybe somebody else can chime in on how to do that!

thanks for your reply, really appreciate it, I tried moving the sun/directional light direction but I couldn’t see the vector in the shader updating, I will investigate more in depth

I;ve got a version of this shader working with directional lights and 2 point lights in Unity…I can past some bits to help if your interested…

Hi Alcolepone,
I am interested in how you set this up in Unity. I’ve been playing around with this most of the day and can’t say I’ve had success.