Learning Unreal from nothing?

Hello! I’ve just recently committed myself to buckling down and learning VFX for games. I’ve (semi-arbitrarily) decided to focus on Unreal, however, I have exactly zero experience with game engines.

A little more about my skillset/background: I recently graduated with a degree in animation, so I have a working knowledge of modeling/texturing/animating/particle systems in Maya, as well as some understanding of After Effects. For part of my grad portfolio, I put together a demo reel of 2D FX animations, which were all hand-drawn in Photoshop. You can see that here if you’re interested, even though some of it’s a little old and painful to look at. ¯_(ツ)_/¯

I’ve also been lurking here a few days and reading threads aimed at complete beginners, putting together lists of resources and tutorials for later, etc…

So my problem is this: I’ve already poked around a bit in Unreal, and taken a look at some tutorials/documentation for Cascade, but I still find myself a little lost when it comes to the overall workings of the engine. What are the features I should really be focusing on so I have some basic literacy with Unreal before I dig into Cascade? What can I safely ignore (or defer to a later date)? Right now I’m looking at the massive tutorial list and feeling a little… overwhelmed.

Any nudges in the right direction would be helpful! And, uh, sorry if I’m posting this in the wrong place.

I’ve already poked around a bit in Unreal, and taken a look at some tutorials/documentation for Cascade, but I still find myself a little lost when it comes to the overall workings of the engine. What are the features I should really be focusing on so I have some basic literacy with Unreal before I dig into Cascade? What can I safely ignore (or defer to a later date)? Right now I’m looking at the massive tutorial list and feeling a little… overwhelmed.

I understand. Really I do. Well, good news is you already seemingly have the background knowledge down when it comes down to making the assets. Alright, let’s start simple…

First of all - just get in there and just play. Break the darn thing if you can DARN IT! Poke the buttons, twist the knobs. Drag, drop, see what happens. Let click and right click everything! Look at the example content I’ve linked in the last paragraph. DIVE IN!

It isn’t going to bite you… that comes later.

At this point I’m going to presume you’ve figured out how to move about in the engine, because you dived in and played with the engine and looked at all the stuff. So Unreal is a real time engine - that basically means what you see is being made by the computer when you see it… You are not (yet… as in we literally can’t yet) going to make what you see in movies with out ALOT of trickery and know how. Baby steps.

On that note… Can you import a mesh into Unreal? How 'bout a texture (.tga)?

Anyway, If you can you import a mesh and a texture into Unreal, then you have completed a very important step. Next…

You can make a material, which is where you put your textures (drag and drop), by right clicking in the content browser like so…

UV’s! Do you understand how UV’s work? If so - you can probably make an energy shield effect now. Yes really… with enough out of the box thinking. Admittedly, I may be getting ahead of your speed. But… I know… you want to understand the real goods.

Not yet. You’ll blow out a gasket that way, in those seas of options, that programmer-esk UI. In fact, alot of this is going to take time. How long did it take you to learn Maya? We’ll it’s going to be the same with Unreal too. That said, if you can’t take no for an answer, and just really want to dig into cascade and make pretty stuff - reverse engineer.

I’m a beginner to VFX myself and had almost no knowledge on how to use the game engines until recently end even now I still have a hell of a long way to go. The way I approached learning Unreal was by simply building something in it that would encompass as many things as possible.
I built a relatively small scale environment and it introduced me to using materials, the FBX workflow, using lighting and even cascade. Gives you a little bit of knowledge of everything and allows you to give more context to the VFX you make for that specific environment whether it be dust particles, rainfall or anything else.

Here is the second thing I made Unreal if it helps give a little more context to what I mean. A couple of the VFX and meshes are taking from the starter content so I can’t take credit for all of it, however most of the content in this scene is mine. 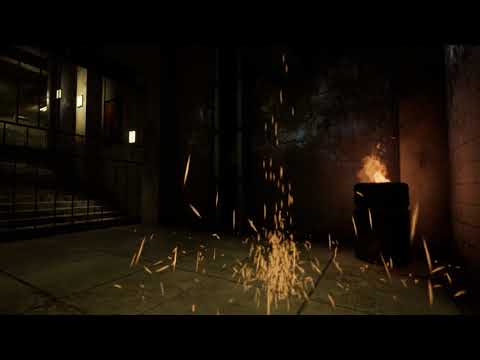 Hey guys, thanks for the responses. Really hits at the heart of my issue which is that I have a tendency to want to do things correctly to the point where I scare myself off from doing them at all.

So! No more of that!

Luckily I don’t have much going on today so I can get in there and start working on actually building some stuff.