Hey everyone! I’ve been checking out the resources on here for a while now but I’m way overdue to start posting, so I wanted to share my reel. I’m graduating in about 2 weeks from school, so it seems like a good time to start documenting my progress. Any critique would be hugely appreciated!

I really love your overall motion and timing of elements, it’s super fluid and fun to look at! The shapes you are making are also very cool. That first ability with the rocks is really well done. I love that hit effect.

I’m going to be a bit picky here with the feedback! I’m also taking on the assumption that you’re shooting for MOBA style effects. One thing that I think could be clarified on a couple of abilities is the focal point and where you direct the eye of the player. Usually we try to put focus on the parts of an ability that are relevant to gameplay, and keep and “nice” looking pieces as secondary or tertiary. An example of this is with the glowing rock and the missile in your first ability: 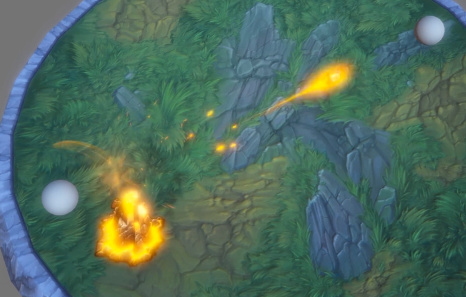 Both the rock and missile and rock draw my eye. I’m assuming the missile is the most gameplay relevant piece in this ability, so perhaps toning down the rock once the missile has left can help the audience look at the missile.

The other major offender of this to me is in your Call of The Void ability: 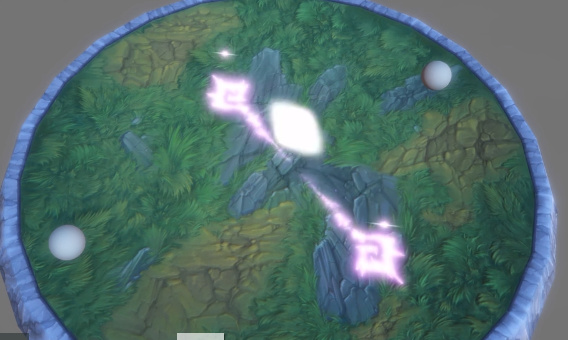 My eye doesn’t really know where to look for gameplay relevant pieces. The ground decal and the orbs that move towards the center share an equal amount of my focus, and because of that I’m not sure what to look at in this ability (overall I really love the aesthetic, it’s just focus point, allowing some elements to be secondary, and tertiary, sintead of everything being primary focus).

Value, hue, saturation, shape, motion and contrast with all of those things is how you can usually effect your focal points. Moving away from your specific works, I’m gona speak bit hypothetically here

. Sharp shapes on their own don’t draw a players eye, but when sharp shapes are right next to soft shapes, that is contrast and my eye is drawn to it. Value is the same. My eye isn’t drawn to bright effects if everything is bright, but will be drawn if darker values are right next to it (keep in mind the ground of the game your making the effect for, because that is often a piece in the equation). Saturation is the same. Put low saturation right next to high saturation and it will draw your eye. I think you have great control over a majority of this, but I went ahead and made this little chart to hopefully help others who come across this post:

These are all in relation to the background the effect is on, as well as surrounding VFX.

Looking forward to more from you Dragonthyme! Overall this is really fantastic work that is 90% there, now for that last 10% polish work!

Wow, thanks so much for writing this all up! I really appreciate the specific feedback. I should be able to polish these up without too much trouble, and it’s awesome stuff to keep in mind when I’m working on my next one.

I was wondering if you thought that there was anything specific I should work on to round out my reel? One thing I’m planning out is a little hand-painted, cutaway environment square I could noodle some environmental FX on, like streaming light, falling leaves, maybe a puddle of water, etc. I’ve got a few other things in mind, but I was curious if it felt like there was anything “missing” from my reel I could tackle.

Again, thanks so much!

Despite the nit picking, I really love the timing on the first one and the effect in general looks pretty cute!

Thanks!! That was my entry for the Riot Art Contest, I’m thrilled people are responding so positively to it. I was really focusing on honing in on the character of it.

I’ve got a few other things in mind, but I was curious if it felt like there was anything “missing” from my reel I could tackle.

It’s hard to say in general. It really comes down to what type of work any specific studio needs to be done, or what they are hiring for. If putting “more” on your reel just waters it down and isn’t the best of your best work, I would say avoid that. As far as branching out to do environmental VFX work specifically on your reel, I personally don’t see that as a negative (if it still meets a high quality bar). Others may disagree.

Really cool stuff! If you don’t mind me asking, how does the deforming effect of the orbs at :23 work?

This is some really fun stuff! I agree, your timing and shapes are really great.

Also, thanks to @NateLane for giving such useful feedback! I love learning from this stuff, too!

Thanks! The deformation is from squashing and stretching from animating the position/scale in Unity’s animator, combining that with the noise dissolve/fresnel/etc. I’ve also got a screen-space projection so it looks like the orb is “cutting out” space which was fun to work out with Shader Forge. I can post my node map if you’re interested! I think it’s from before I got really comfortable using Shader Forge though so it might be a little disorganized, haha.

Ah nice… the dissolve that happens right as the orbs move each other makes the whole deformation look a lot more interesting and complex. Never would’ve guessed it was just a squash and stretch going on there - could’ve sworn there was some vertex shader magic happening. I have a pretty good idea of how the space coloring effect works now that you’ve explained it so I don’t think I’d need to look at the nodes, but I very much appreciate the offer anyway. Keep up the good work and thanks for answering my question.

Thanks for the kind words and feedback everyone!

Here’s some progress on the next thing I’m working on. I did the mesh and animation in 3ds max, and working on revising the material and projectile movement right now. It’s still in the early stages, but I’m excited to finish this one out.

I wanted to go nuts with trails on this one. Gotta do the start/impact FX now, gonna be fun.

I love the follow through on a lot of your animation and impacts! It makes everything feel nice and weighty:slight_smile: