I’m working on another sequence for this sketch which will cover the following stages: idle, beam charge, fire, and target destroy. Apart from the beam visuals, here are some goals:

Here’s the ref board + first concept for my version of this sketch: 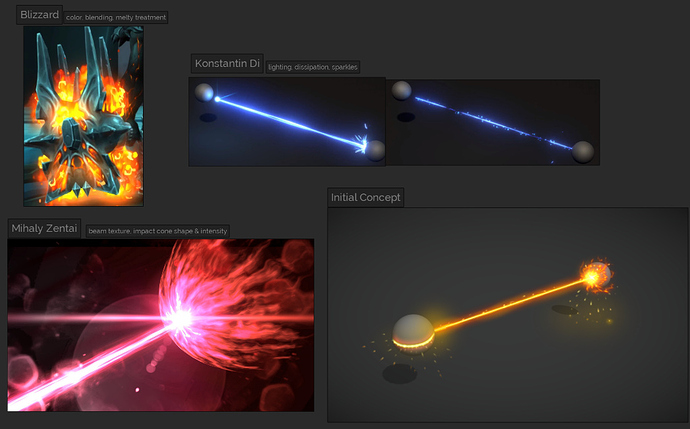 Here is what I’ve set up in Unity:

I started diverging from my concept pretty early on, but that speaks more to my novice painting skills. I will be redoing the paintover with updated elements, so I can workout the “destroy” stage. I’d also like to storyboard some of the shots, per stage.

The effect isn’t sequenced yet, so everything is going off at once. There will be distinct “intake” phase for the cannon, which should reduce the noise a bit. I’ll be sequencing the shot with Timeline as the effect develops!

Here are rough stages of the cannon (I just toggled the effect in the editor. It will be less janky once properly sequenced):

Its got a good foundation. The point of impact and point of firing is the places I’d add a little something more.
Impact point has a green glow in the video, if you want green then that color has to be more integrated in the other elements, if its more like the thumbnail gifs with no green then I’d make a mini version of the whole splash effect that comes off an a sharper angle. Or maybe something like the Konstantini Di example.
Firing point I’d say just something to help it be less of a clean exit. Even a glow or something to break up the point a bit.

It contains more work to the effect, along with a sequencing pass.

Thank you for the feedback, @DavidSchoneveld ! I added a stretched flare to the exit and a more pronounced flare at the point of impact. They kind of feel like overlays with how I authored them, so I will try your suggestion of some more mesh styled shapes.

The green was an early attempt to mix in a different hue, but I am having trouble making it look intentional, so I swapped back to a more monochrome effect. I’ve noticed that I have a tendency towards additive overlays, and I wash things out quickly!

I also got some feedback about it looking like a pokeball

, so I removed the round feature at the front. I reverted to a grey ball for the cannon as well, as the black/shiny mat was distracting.

I should be able to get a few more evenings this month to work on it, and I will keep posting as I go. I will try to get a better recording next time as well… My OBS settings seem to be lacking.