Full Video of the final effect.

I’ve already started trying out some things for this challenge and this is what I came up with for now. It’s a very very early work in progress and there are lots of things I want to add/replace. I made this in Unreal Engine. I would like to get some feedback early on, so that I can make it as awesome as possible.

Here’s a small list of things I want to do:

This is looking good, would be nice to see more ‘destruction’ itself, wether that be the shards that rise from the ground breaking through, or even like you’ve mentioned cracking the ground straight down the middle (prebaked simulation from maya or Houdini )

Could add some screenshake into spitting lava into huge lava geysirs

It’s a good start! It feels a bit too smooth at the moment, I’d suggest making the rocks popping out in a punchy manner, getting more intense towards the end. Perhaps pushing out a single rock at a time, taking turns between left and right to make it seem a bit more chaotic and asymmetric? Camera shake like Ninjin mentioned would look great!

Is it weird; that I want more of a dust or ash maybe dirt build up blast? MORE POowah!

Thank you for all your feedback! I’m definitely going to work on those points. Hopefully I’ll get another version out before Christmas.

Didn’t make it in time before Christmas as promised, because I highly underrated having to visit three families in three days! This is the new version:

Edit: I realise I have trouble recording without having lag. I’m using OBS. Does anyone have any tips for this?

I would suggest just rendering out a Highres video using sequencer.

Some folks on Twitter suggested I sync the fire with the rocks, so there’s no delay. This is the result. I also added a shockwave on the impact point, a camera shake, debris and sparks. The breaking ground was done in Houdini by the way.

Glad to see how it worked out! This feels a lot better to me, without the delay there’s less movement competing for the viewers attention, which makes the effect easier to understand. The camera shake adds a lot of forcefulness too!

Thank you Chris! I’m also much happier with the result now. At first it felt a bit incoherent to me, but now I don’t have that anymore.

Sweet! Really liking where this is going

Hope that helps a bit! Looking forward to the end result

Woah, you are joining the challenge too. I din’t see your entry.
Great powerful attack!

Thank you for these elaborate tips! These are great to move forward with. I had a bit of a busy few weeks, but I can start working on the effect this weekend again!

The plan is to also create a new fire material by making a fire flipbook texture in Houdini.

I’ve been working on a new simulation for the ground fracturing. I also did a LOT of tweaking on the particle effect. I’ll post a video in my next post, so you’ll be able to see the effect in better quality.

Here’s the video of the final effect (with a slow motion take, because my boyfriend insisted on it). 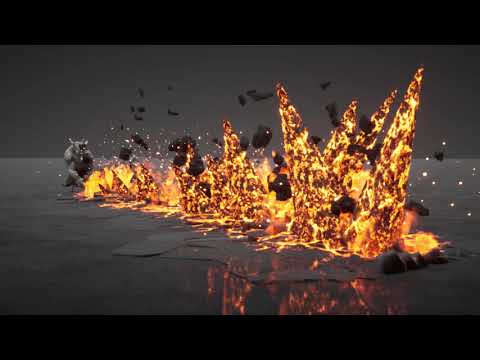 Even though he did not participate in the contest, @Luos_83 did an amazing job doing an overhaul of my entry, which might be of interest to you. These videos go in depth into every part of the effect with an incredible result. I’ve already learned a lot from them and I will take everything I’ve learned with me into my next project.

niceeee!, I really like it. Could be a cool effect for a monster in Evolve. If they were still working on it